We were chased home by feral dogs in Bali. That same night, I was almost run over by a moped when I was crossing the street as we headed home.

We began our day around 9, expecting to have brunch around noon. We had hired a driver to take us around for the day for 500,000 IDR. Instead, traffic meant that it took almost two hours to arrive in Seminyak from our villa in Sanur. By the time we arrived at Tannah Lot Temple, it was already midday. The temple was beautiful, sitting amongst the crashing waves. After we snapped some photos and were blessed by the priest, we headed back towards the parking lot.

One the way, Rajiv, who is a coffee connoisseur, and Jo-Jo wanted to try to luwak coffee at Black Eye. We were also able to pet an adorable luwak on the way. Our driver offered to show us a luwak production farm, where we learned about the process to make luwak coffee. Shelly posed with a couple of baskets and we all picked up some coffee as gifts.

Famished, we headed into Seminyak to go to Sisterfields Café. The café was super Instagrammable and the food was pretty good. I had eggs benedict and we all split a chocolate French toast. JJ and I then went shopping, when I spontaneously bought a really nice dress. Rajiv, Jo-Jo, and Shelly headed for the beach, where Shelly got knocked over by a wave.

I had booked massages for us the day before so we regrouped and headed to the parlor to relax. After massages, we had our driver take us back to Sanur and drop us off at Bunana, which sold Roti Canai. We were all stuffed on $10 of roti canai total. The roti was delicious as well.

We had planned on walking back to our Airbnb, which turned out to be a harrowing experience. I almost got run over by a moped as we crossed the street back to the house. Also, we got lost, my phone died, we were chased by feral dogs down a street, and some kind people at a café let us use their phone to call a taxi to take us two minutes back home. After such an eventful evening, all we wanted to do was rest. 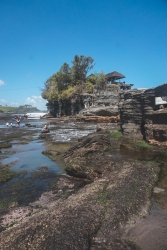 JJ at the luwak farm 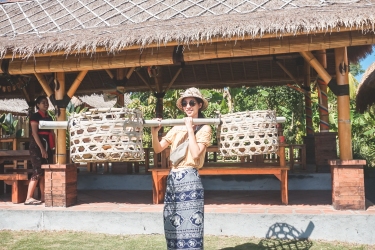 We woke up at 6 am in order to head up north. We first headed several hours to Lempuyang Temple—one of the six big temples of Bali where the incredibly Instagrammable Gates of Heaven resided. The line for that photo took over two hours and so we just walked around and headed out. The scenery around the mountain was definitely beautiful and we were able to take motorbikes down the mountain.

Our next stop was at Tirta Gangga, a local garden. There were fountains and massive koi fish in the pond that were definitely overfed. We bought three packets of fish food to contribute to this as I studiously tried to avoid falling into the water. After, we stopped by Tukad Cepung, a waterfall in a cave. The water sparkling through the rocks was beautiful.

By this time, we were pretty hungry and so we headed to Milk & Madu in Ubud, which Quinn had recommended. They had pizza and burgers and Shelly and I each got an acai bowl. Full, we wandered around Ubud downtown a bit. We had planned to head back up north, but decided it was too late and headed home. Jo-Jo took a nap and then Jo-Jo and I headed out to grab some JFC before heading out. Unfortunately, I got a little to lit and fell asleep before doing so. The rest of them headed out to La Favela for the evening, coming home around 5 am. 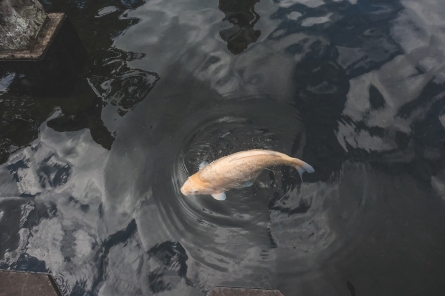 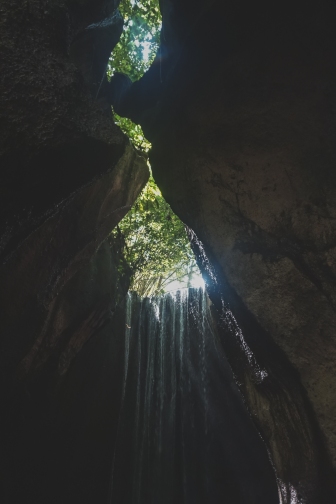 We all woke up quite late and didn’t head out of our villa until 3 pm. We headed back to Seminyak to Ginger Moon, an Indonesian-Vietnamese fusion restaurant. The noodle soup definitely helped us come back from the dead. After our late lunch, Shelly, Rajiv, and I went shopping and Jo-Jo and JJ headed to a pharmacy to take care of Jo-Jo’s head injury from the night before.

We then all headed together to Potato Head. We had to finish some drinks outside, where we met some friendly Australians who corrected us on our Australian pronunciations. Upon arrival, we all had dinner again at the Indonesian restaurant upstairs. Our pork belly kebabs and friend rice were divine. We then all chilled by the pool for a little bit, sharing a pitcher, and wandering to the beach. Since the waves were too strong and the water too cold, we couldn’t go into the ocean.

When we headed out from Potato Head, it was already almost midnight. We tried to go to a club, but the boys didn’t have the right shoes. We also tried a rooftop bar, but they were closing. Instead, we just headed back to talk and sleep. 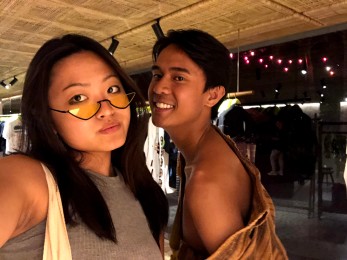 Today was JJ’s last day with us. I headed out early to make a stop at the Bali consulate office to see if I could get a temporary passport since my passport was running out of pages. It turned out I had to wait four weeks, so I headed back. We meant to go to Celuk, the silversmithing village before JJ left, but didn’t have enough time to do so. Instead, we walked to Kayumanis Sanur for lunch. The restaurant was in an isolated street but very nice inside.

The food was exactly the right portion, and, after we ate, we bid goodbye to JJ. Shelly, Jo-Jo, Rajiv and I then headed to Celuk. While the pieces in Celuk were hand-made, the first place we went to just wasn’t our style. We did pick up some silver studs for JJ. I picked up some fashionable rings for Melissa at Japa Silver. We were trying to catch the sunrise at Uluwatu, so we hurriedly took a Grab back south.

The Grab driver told us that Grabs were not really allowed to be around Uluwatu and so we might have a difficult time getting back. This foreshadowing did turn out to be true. While the temples were nice, the most beautiful part of Uluwatu was the view of the ocean. We watched the sunset and headed back before we could be attacked by the amassing monkeys. These monkeys were quite aggressive and I saw several people lose their glasses, as the monkeys chomped on them happily.

It turned out that we had to take out some more money to get a taxi to take us to Manu, a taco joint a bit further from Uluwatu. It was worth it though. Even though dinner did take a while to come out, the food was delicious. We had the restaurant help us call a taxi back to Sanur. When we got out, all I did was shower and then pack for my 8 am flight the next morning. I also tried to sleep for a bit. 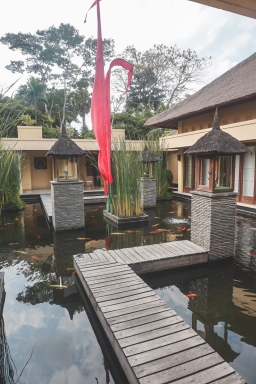 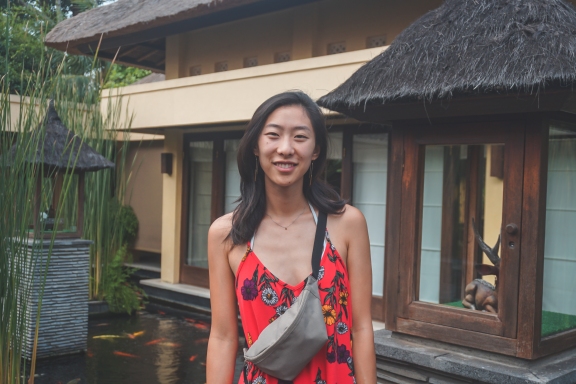 Posing with the sunset

Us in front of the scenery