We were awoken by the aggressive mooing of cows. When we first talked about camping in a yurt it was a bit of a meme. We imagined a tent covered with animal hides, staring at the stars in the middle of nowhere. In reality, it was quite nice, lighted, and had Wifi we forbid ourselves from using.

For our first day, we woke up early to grab breakfast from the grocery store and meet with our tour guide from Campit, a local tour company. Unfortunately, she didn’t speak much English so Slava was tasked with much of the translation. We headed off early for our 4 hour long drive to our first destination, Charyn Canyon.

Charyn Canyon is known as the smaller sister to the Grand Canyon. It’s also massive, but not quite as deep, with large orange striated rocks. Apparently the river had flooded only two weeks ago, but the only remnants of that were some toppled rocks and traces of mud in the shadows.

We hiked down to the camping town and sat by the river for a while. On the way back, Marie, our guide, asked us if we wanted to do a slightly more difficult trek. This trek turned out to include some climbing of rocks. With my ankle, I was a bit scared of falling, but luckily it wasn’t too long. The views from the top were absolutely worth it.

Next, we headed to the town where we would be camping for the evening. We ate lunch in the largest yurt, polishing off milk tea and seven dishes with ease.

Full, we headed out for our afternoon at Kolsi Lake. Although we were expecting a hike, we were pretty much driven to the lake. We rented out three row boats and rowed around the lake for an hour. It turned out that a couple had paid $500 to make a pre-wedding video that same day and so there were drones and camera equipment all over the docks. For Kazakhstan, that’s a fortune.

Once the mosquitos started arriving, we drove back to Saty village for dinner. We ate outside the yurt, with a beautiful view of the nearby mountains and rivers. Once full, we headed back to our well-furnished yurt to go to bed. 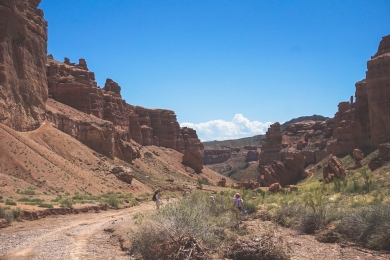 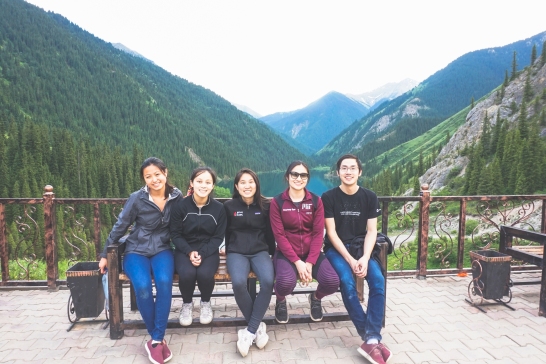 The next morning we awoke at 8 am for breakfast, although several of us woke up earlier due to the aggressive mooing. The bread and raspberry jam and milk tea were delicious. We each added so much sugar to the tea that it tasted like boba.

Full on sugar, we packed into a older, hardier truck to begin our drive to Lake Kaindy. Good thing we didn’t eat too much because the drive was super bumpy through rivers and over mountains on unpaved paths.

Once we arrived and got our footing, we headed to the lake. The lake had been created only recently after an earthquake flooded the valley. The trees that had been in the valley remained erect in the lake due to the oils they secreted. The resulting lake looked like it had sharp spears protruding from the turquoise water.

We also took a hike to see the same lake from above and from the river that flowed into it. Michael tried to jump to this log in the lake, but ended up getting his shoes, and much of himself, wet. We hiked back to the parking lot and ate some snacks before heading back to Saty village to change cars.

After another two hour nap, we arrived to a Urgu restaurant. Urgus are minorities in many countries throughout Central and East Asia. The bathroom next to the restaurant was probably one of the smelliest I have ever been in, comparable to the squatting toilets in rural China.

The food was amazing though. We got three different types of noodles—lagman, fried, and boiled. They also came out super fast. Since we decided to make this dinner as well, we double ordered our portions. Full, we began the three-hour drive back to Almaty, where we all showered and went to bed.

Us in front of Kaindy Lake